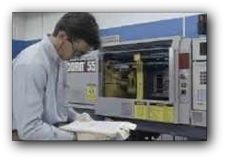 Balancing Runner Systems - A simple approach to a complicated problem.

This is a subject that has become very controversial. In the very early days of our industry one definition of a balanced runner system was that the runner was symmetrical in appearance. That meant that everything on the right side of the sprue physically looked like everything on the left side of the sprue. Then, as time went by, the definition changed as we became more scientific with the molding process in general.

Today the definition of a balanced runner system is that every cavity within that system is filled with plastic under identical pressures and identical fill rates. In practice that means that each cavity should FINISH filling at the same exact instant using the same exact pressure. You can see if this is happening by molding successive short shots, increasing pressure until you get filled parts. Watch the fill of the parts and if they are all filled the exact same amount just before final fill (95-99%) you have a "balanced runner system". That will be true no matter what the runner looks like! That should indicate to you that you can also adjust the runner diameters to help balance the flow.  Also, if you are lucky enough to have access to pressure transducers and can place one in every cavity you will be able to track the flow and filling on a computer screen in real time.

There are a ton of concepts available regarding how to balance a runner system. That's where the controversy of this subject comes in to play. I don't wish to judge them. I will only state my opinions. I am a believer in adjusting gate sizes to balance the system. After all, the primary benefit of having gates in the first place is that you can use them to control the flow of plastic into the cavities.

Originally gates were only in place to make it easier to remove the molded product from the runner system. Prior to the use of gates, parts had to be machined away from the runner. Creating a necked-down area where the runner met the part made it easy to simply "snap" the part away from the runner. It was then discovered that this necked-down area also improved the flow ability of the plastic and made it easier to fill the cavity. Further experiments resulted in determining very exact gate dimensioning for every plastic material under  a variety of molding conditions. Even today the scientific approach to gate design is continuing with new discoveries being made all the time.

I happen to believe that adjusting the gate size and shape is a very acceptable method for achieving a balanced runner system, if it's done with common sense. (I'm talking about a surface runner system here, not a hot runner system). It should be performed a little at a time. For instance, if I wish to open a gate that's 0.030" x 0.060" in area, I would only increase the width, not the thickness. Increasing the thickness will affect cycle time, where increasing the width won't. And, I would only increase the width by 10% maximum at a time. Then I would analyze the results and compensate from there.

While this approach may seem to be one that may take a long period of trial and error, in reality it takes very little time. The initial gate design can be calculated scientifically prior to machining and the machining process should result in gates that are extremely accurate. Once the mold is put in a press and sampled, the determination can be made as to whether or not specific gates need adjusting. In my experience I have never had to perform the adjustment activity more than twice on any specific mold.